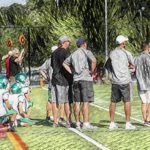 There are certain elements of football that have been accepted for so long that they have been accepted as gospel. Certain techniques, alignments, schemes, etc. are simply known to succeed or fail. Here are five ways I have bucked the tried and true and allowed my players to succeed.

A three or four point stance gets them off the ball faster and lower.

Everyone knows that a good three or four point stance is critical to winning the line of scrimmage and that low man wins, right? Years ago, I challenged both of those pillars of line play and haven’t looked back. I watch a great deal of film, probably more than most youth coaches. What I see on film tells a different story.

A three or four point stance requires above average strength in the lower body, core and upper body to be of any advantage at all. Most youth players, especially bigger players lack all of the above. What I see play after play is a lineman who’s first move is to get out of that uncomfortable stance and stand straight up. Not only is this wasting precious time that could be used moving forward, it is putting a player in an immediate leverage disadvantage. Most often, I see linemen with their arms and legs shaking, necks twisted and far from football ready. This summer, I watched a varsity offensive line coach getting frustrated trying to get a good stance out of a third grader. He eventually came to the conclusion that the player’s helmet was too big. In reality, the high school coach failed to understand that the geometry and proportions of an eight year old are vastly different than a teenager. Short legs, short arms and long torsos make for difficult stances.

One season, I was running an offense from a manual that called for a three point stance. The manual prescribed focusing on stances for five minutes of every practice. It promised that by the end of the year, all players will have proper three point stances. Suffice to say, that is not the result that I experienced. One player had a passable stance and that young man did a lot of body weight exercises at home to train for another sport. For the other players, the stances were noticeably better at the end of the season, but on film, I didn’t see our guys gaining an advantage. It still came down to Jimmy’s vs Joe’s. We probably had around 50 practices that season and spending five minutes on stances cost us close to five hours over the course of a season. Based on past experience and observation, it was my opinion that a lineman (offense or defense) in a two point stance is more effective on Day One than the same player in a three or four point at the end of the season.

As far as low man wins, I believe that low man is simply lower. The following season, coaching a different team, I convinced the Head Coach to give up on three point stances and teach a solid two point. Get-off was vastly improved right off the bat. As far as pad level, we had issues, but ironically not as bad as from a three and four point. The eye opener was playing an opponent who had scouted us and had their six man front submarine us in order to be low man. Our line struggled at first, but we called a time out and showed them how place their far hand on near hip and roll the defender onto his back. After four straight big gains, our opponent called time out and killed the submarining.

If you need more convincing, put a stopwatch on a lineman to see how long it takes for him to travel three yards from a proper three point, four point, then a two point stance.

A proper snap under center involves a sideways twist , and a proper shotgun snap is fast and spiraling.

I have coached the “Wyatt Snap” since 2009. I have been ridiculed for this until very recently when the NFL started using it and dubbed it the “dead snap”. If you’ve never heard of the Wyatt Snap, the snapper holds the ball by one point, while the other point is in the grass. To snap the ball, he simply racks himself with the ball with no lateral rotation. The QB holds his hands in the undercarriage with both thumbs aligned and touching their entire length and all four fingers extended and pushing up against the center’s crotch and thighs. Think of a bird shape with the hands.

But everyone knows that when the QB is under center, you twist the ball sideways to snap the ball, right? Let’s examine why that snap came to be. In the late 30’s and early 40’s, the forward pass was starting to take a more prominent role in pro football. The twisting snap allowed a passing quarterback to quickly get a pass friendly grip on the football. Footballs were much bigger and rounder back then, so fiddling with the ball to get it in a position to throw took longer. In modern youth football, 90% of your plays are runs, so it makes little sense twist the ball sideways, especially when a football is too long to pass sideways through a typical youth center’s legs. In addition, a two handed grip is much more accommodating to a young player’s hands.

Direct, or shotgun, snaps are becoming more popular in youth as the popularity of Spread and Wildcat offenses increases. Since the big boys on TV snap the ball hard with a tight spiral, we youth coaches should teach the same thing, right? This weekend, I watched a local JV team struggle with their direct snap. On average, every fourth snap was off target, either too high or to the side. In the 1st half, I counted six snaps that sailed past the QB, netting a total of minus 80 yards, including a safety from the offense’s 20 yard line. At halftime, I saw the offensive line coach teaching his center the dead snap. They learned an expensive lesson that an off-target hard snap is about 100 times worse than an off-target soft snap. A snap that is too short, while far from ideal is still workable. Our approach is the same as our under center Wyatt Snap. Grab the ball by the point, and swing it like a pendulum. Find a release point between the shin and mid-thigh and stress keeping the wrist firm and straight. Simply let go with the fingers with no flick of the wrist. This snap has been the source of a lot of ridicule over the years. Now that it’s a common technique in college and the NFL, it’s apparently okay to use it. I actually had a coach quit the team and take his son (our center) with him because my weird snap wasn’t preparing his 5th grade son for high school football.

Try both snaps with your players and see if your ball security doesn’t improve.

It makes sense, right? Less ground to cover means less space for defenders to run free into the backfield, right? Okay, this is a much harder sell because some of the vulnerabilities are obvious. Committing to huge splits requires the offense to go all in on the concept. By huge, I’m talking Mega Splits.

I’ll start by stating why Mega Splits work for us.

Now, I’ll address the obvious vulnerabilities and our countermeasures.

To reiterate, Mega Splits requires a full commitment by the entire offense, coaches included. It takes time to learn the problems and their associated solutions, but we’ve averaged over 30 points per game over multiple seasons.

Use special teams to win the battle of field position.

Conventional Thinking: Kick the ball deep and pin them back.

Heresy: Never punt (unless you have a punter with a consistent 40 yard leg)

Wait until at least 4th grade before developing a passing game.
﻿

The challenges of passing the ball with young players are daunting.

The Heretic approach to addressing these challenges:

The point is to question everything. “Why do we do this?” It’s rarely, if ever a good reason to do something because your high school or your favorite college/NFL team does it. Think outside the box and don’t be afraid to challenge institutionalized knowledge.