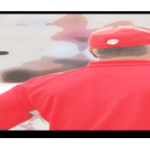 Because it is raining makes little sense. You cannot control the weather, the rain is going to fall, the wind is going to blow. Why worry about things that you have no control over?

Guess what else we cannot control? The men in the striped shirts (or I guess in some cases, the women as well). They are going to call the game the way they see it, they are going to decide when to throw the flag and when they are going to keep it in their pocket…and guess what, you can’t control that either. So why in the world would you shout at a game official? Just like shouting at the sky won’t stop the rain from falling, shouting at an official is not going to make him see things your way. What it is likely to do is get him annoyed with you.

We worry about the things we can control. And as a coach, the only thing I can control is what my team does. I guess I can also control what I do and how I react to situations that present themselves over the course of the game.  And I will very rarely yell at an official for what I consider a blown or missed call. I say rarely, because just like the officials, I am human, and I will make a mistake periodically (like every day).

So how do we deal with a bad or missed call? Well, I generally ask for an explanation. What did you see? Or didn’t you see that? Or is that tackle allowed to hang off the legs of my defensive end like a Christmas Tree ornament? Not once do I shout when asking these questions…but if I was polite and professional, hopefully he sees that I am reasonable and will watch a little closer for whatever “it” is next time.

I have learned a few things about dealing with officials. First, know the rules that you are playing under. It gives you credibility when dealing with the officials. Every pre-season I download the latest versions of the NCAA, Texas UIL, and my local league rule books. And I go through them looking for the changes and what they are considering “point of emphasis” rules. Oh, I forgot, when I first started coaching, my knowledge of rules was limited to what I saw on TV on Sunday…and when I would mention one of these Sunday rules the officials would dismiss me as being a knucklehead. And as I am not actually a knucklehead, I decided I needed to know the rules, so before going through and looking for the changes, I decided to read through them first. Now, it’s just looking for the changes.

Another thing to consider, how big is the crew? In most youth games, you have two linesmen and a referee, by my math that is 3, and they have to watch 22 players with only 6 eyeballs. A Friday Night or Saturday/Sunday afternoon crew has a few more striped shirts on the field, who have particular responsibilities. With only 3 officials, and 22 players, there is no way they are going to be able to do everyone’s job. Holding is going to be missed because they do not have an umpire on the field. Pass interference is going to be missed because they do not have back or side judges on the field. Generally they will get false starts, offsides and holding on the edge. And no mom, they don’t want to look at the pictures on your iPhone and see the way big number 56 just held your little snowflake. Set reasonable expectations for what the crew is going to be able to do, and you will likely not come away disappointed.

Arm your players with some knowledge of the rules as it pertains to what they play. Your OLB’s or defensive linemen, let them know if they are being held, they have to get separation from the lineman holding them, or it is never going to get called. Teach your offensive linemen that they must keep their feet moving once they latch on to the breast plate or else, they are going to get called for holding and if the bad guy is getting away from them, they have to let go. Teach your perimeter receivers that if they can read the other player’s name, they cannot block them.

But what do you do when they are not calling ________? (fill in the blank). You as a coach must have an answer, just as you do in your offensive or defensive schemes. A few years back, my team was running Double Tight Double Wing, a contrarian offense. Very compressed, hard to see anything that happens in the middle of the field, especially if you are running wedge, and we loved to run wedge. The opposing teams hated us running wedge, because most of them couldn’t figure out how to stop it within the framework of the rules. So, they would teach their boys how to cheat in some manner. We played one team that taught their defensive line to just grab our offensive linemen’s legs and tackle them. When we figured out what they were doing, we asked the official to watch for the defensive holding. They said “Sorry coach, we can’t see it”…we had an answer, we ran something other than wedge, and it did two things…one we were able to move the football again, and two, it allowed the officials the space to see the holding by the defensive line, and they started calling it. The bad guys stopped holding and we were able to wedge again as well, so I guess it did three things.

If, like in my league, you are lucky enough to see the same crews on a consistent basis, learn what they are likely to call and what they are likely to ignore, and adjust to them. The other thing I like to do, because I am a “people guy” is chat with them in the pre-game, or post-game. Ask them about rules interpretations. If you are going to do something goofy, or off the beaten path, let them know about it in advance. A few seasons back, we had a team in punt formation, that would motion the gunner into the backfield, which made him not the gunner anymore, but the end man on the LOS was the gunner. It was a mechanism to confuse our punt return team. Well, because of the gunner’s alignment, he was eligible to be cut by my defensive line. Pre-game, I went to the officials and told them we intended to cut him down, the official said the cut had to be immediate while both players were still on the LOS. So I coached up my right tackle (I moved him to punt return for this game for this specific reason) and let him know he had to cut the gunner down as soon as the ball was snapped. He did, the other sideline came unglued because “you cannot cut in the open field on scrimmage kicks”. The officials did not flag it and explained the reasons to the other sideline. After the second time we did it, they aligned their gunner more traditionally. Would they have flagged it had I not talked to them about it pre-game? I don’t know, but I do know they didn’t flag it because we did. Get to know them, most of them are pretty good guys.

The last thing I do, and this I know is silly, because they are going to call what they see…but I try to help them see what I see…if the ball comes out, I always shout that’s our ball and point the way we are going…and I keep repeating “That’s ours! That’s ours!”. And if they don’t award us the ball, when our linesman comes back, I always ask him “didn’t you hear me? I said that it was our ball.” Generally speaking, that at least gets a smile out of him.

Okay, the real last thing…just a quick little story from last weekend’s game. We are currently playing eight-year old rookie tackle. Smaller field, fewer players on the field, special rules…anyway, the center for the team we were playing lines up offsides, his stance is terrible and his head is out in front of the ball. So they break their first huddle…and a linesman who has called a ton of my games is on our side. “Hey, their center is offsides”. He ignores me, second play “Hey, their center is still offsides”…he replies this time “It’s seven-year old football, I am not calling that.” I reply, “Actually, they are eight”. A couple of series later “Hey, the center is still offsides”….”I told you I am not calling that”. The next play, their guard is also lined up offsides, “Hey, number 84 is offsides, and he is not the center”. He ignores me again. We come out of the half…”Hey, the Center is still offsides even if you aren’t going to call it.” And that was the last time I was going to say it….I felt the gag had gotten old…as we get into the fourth quarter, game is in hand…he turns to me and says, “I better get a great evaluation from you, I called a good game”, and he did, the entire crew was pretty good (all three of them). I said “I dunno” with a big smile on my face…he says “what don’t you know?”….”I dunno if I can give you a good eval, the center was offsides the whole game and you wouldn’t call it”…at which point we both started laughing.